Credit unions and community banks have had a stellar run since the recovery from the economic crisis. Membership and customers are up. Loans are up.

But as we head toward a possible recession in the next couple of years, the timing of which depends upon which expert you believe, financial institutions must prepare. That means shoring up their financial position in the best of times and continuing marketing during slower times.

A 2014 study of marketing expenses at 256 banks by The Financial Brand showed that the banks’ median marketing budget was $437,000, or 0.066% of assets. The publication recommends that banks looking for healthy growth should be investing about 0.10% of assets in marketing. Or, look at it this way: invest 0.073% of the asset size you want to be. So, if you’re $750 million in assets and want to grow to $1 billion, your institution should be spending about $730,000, or nearly 0.10% of current assets, according to The Financial Brand. The article also pointed out that the highest spend was at banks between $500 million and $1 billion in assets, indicating these institutions were particularly hungry to reach economies of scale.

Scale is important. Consider that community banks between $500 million and $1 billion were only able to grow loans at nearly the same pace as institutions between $250 million and $500 million (8.4% vs 7.6% in the 12 months ending Sept. 30, 2018), according to Banking Strategist. However, banks of between $1 billion and $10 billion in assets increased their loans by 10.9% during the same time frame.

As a percent of total expenditures, the value of a larger market budget really shines through. Banks with a higher return on equity also had a correlating marketing investment, according to Center State Correspondent Division. 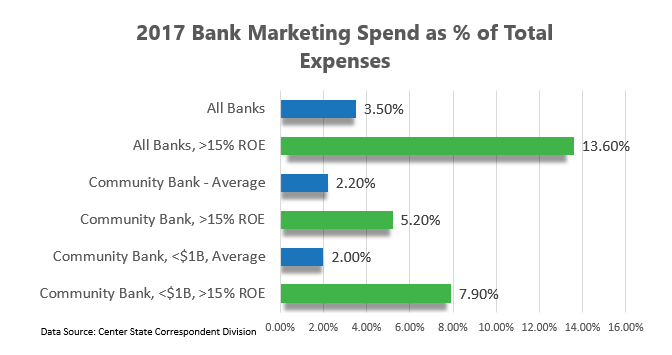 Credit unions are more than holding their own. Overall loan growth reached 10.3% for the 12 months ending Oct. 31, 2018, a CUNA report states. Credit union loans totaled $1.06 trillion as of October, and their share of nonrevolving loans increased from 13.5% to 14.1% YOY as banks and finance companies declined slightly. In the same time, credit union assets grew 5.8% to $1.5 trillion and membership increased to 118.3 million. Various types of mortgages and personal loans led loan growth in October, with only one category of lending (fixed-rate mortgages) declining. Credit unions’ loan to share ratio climbed to 85.8% as of October.

‘Education and promotional’ expenses accounted for 3.9% of their total expense budget, according to CreditUnions.com, higher than the average community bank. Keep in mind that amount also includes educational expenses and is well below the highest performing community banks.

Again, lending is expected to slow and we’re facing a potential recession in the not-too-distant future. Financial institutions, and particularly community financial institutions, which tend to be smaller and have fewer resources than the big guys should be shoring up their financial circumstances for a slowdown. If you want to be one of those institutions that can rest easier during consumers’ inevitable hibernation, the work starts now by ramping up marketing to keep your institution top of mind, heart, and wallet with consumers. GDS Link can help get you there. Click here to learn more.

﻿ By end of this year, fraud is projected to cost U.S. businesses roughly $2.5 Billion, with some research suggesting that figure could rise as high as $5 Billion by 2025. There’s no doubt that every business is vulnerable to fraud, due largely to the numerous ways in which scammers can attack your organization. So…
Collections & Debt Management
Read